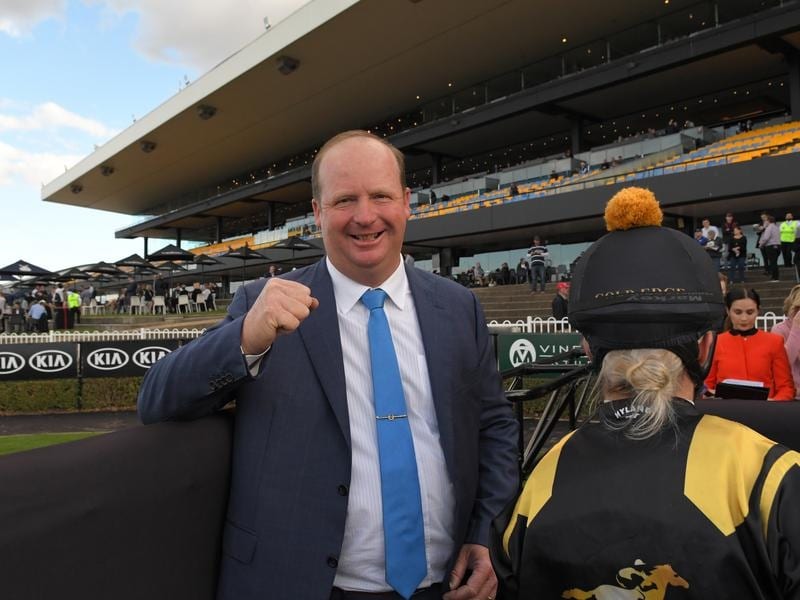 Trainer Gary Portelli is looking to run Nicci’s Gold at Randwick on a seven-day back-up.

Gary Portelli is as busy as ever training his horses at Warwick Farm amid some uncertainty about their goals.

With the Brisbane winter carnival scrapped then reinstated on a lesser scale, plans for several horses are unclear.

While racing has continued during the coronavirus pandemic, programs in Sydney and Melbourne have also changed, and are subject to further alterations at any time.

Among those Portelli had been planning to take to Queensland is last year’s Silver Slipper winner Time To Reign.

The colt is a half brother to the Portelli-trained 2017 Golden Slipper winner She Will Reign.

“He was one I had earmarked for Brisbane but I think we are probably looking at the spring with him,” Portelli said.

“He is in work and doing well and ready to trial but I’m not sure what there is for him now in winter.

“We are really busy with yearlings that have just come into the stable and in fact I am looking for trackwork riders.”

Still Reigning, a full sister to Time To Reign, has been entered for Saturday’s two-year-old race on Randwick’s Kensington track but unless anything untoward happens, will make her debut at Warwick Farm on Wednesday after four barrier trials.

“She’s trialled well and will be running at Warwick Farm,” Portelli said.

“Her recent trial was really good.”

The trainer also entered Ballistic Moon in the 2YO race at Randwick but he will make his debut at Kembla Grange on Tuesday.

Rain is predicted in Sydney in the lead-up to Saturday with most forecast for Thursday.

The prospect has further encouraged Portelli to back Nicci’s Gold up at Randwick seven days after she ran in the Group Three Hawkesbury Crown (1300m).

“We’ll see how she is during the week,” he said.

“She just had a swim this morning and seems fit and well. They are predicting 20 mils on Thursday so if that happens the track will suit her.”

She has been entered for Saturday’s benchmark 88 over 1400m, a distance she has won over three times.

Among the entries is the Gerald Ryan-trained Bandersnatch, a late scratching as favourite from the Hawkesbury Guineas.

The three-year-old was found to have a wound on a leg which Ryan said was not serious.

Portelli also has Improvement entered in a 1250m benchmark 88 on Saturday.