Phelan took the lead in the five-race series when Tommysonaroll bolted in when Phelan was having his first drive at Addington on Friday night.

The North Island reinsman had heat two of the championship parcelled up before the home turn as his charge skipped clear of the field.

Though he clearly had the situation in control, Phelan admitted he did wonder if he had gone too soon.

“I thought I hope we didn’t have another lap to go,” Phelan joked.

“It was really good, I looked back and I did wonder if I have gone at the right time, but the horse went great.”

“It was my first drive at Addington, I have never driven there before and I was rapt.” 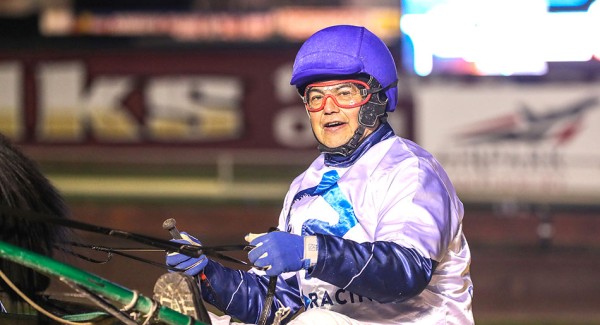 Soon after Phelan’s win he was checking out one of his three drives in the final three heats of the New Zealand Amateur Drivers Championship at Addington on Sunday.

“I just watched Donegal Carnbouy who I am driving on Sunday.”

“When he went to go he got stopped in his tracks and he just had to keep up with the ones at the back.”

“It is a lot stronger field tonight than he will meet on Sunday, but we will just have to wait and see.”

Donegal Carnbouy starts in heat three of the Championship with Phelan to combine with Betterwithbling in heat four and The Terrorfier in the final heat of the series.

“I think Betterwithbling would be a good chance.”

“The Terrorfier won last week and being a Terror To Love you would think he would like 2600m.”

Blair Wilmott held second placing in the series standings with his fifth behind Glitz And Glam.

Andrew Fitzgerald, who helped Phelan to his win in heat two – providing the reinsman with his drive as a part-owner of Tommysonaroll, sits in third equal alongside Barry White and Cheree Wigg heading into Sunday’s racing.