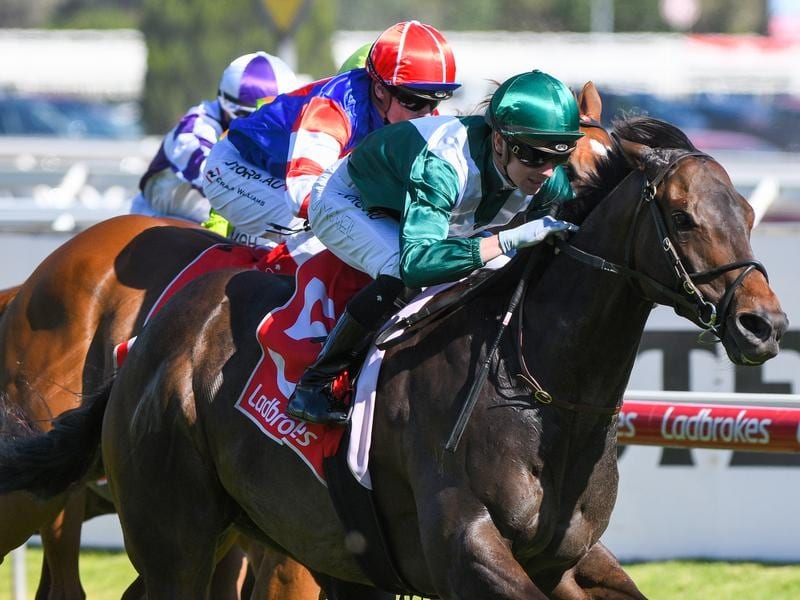 Talented sprinter All Too Royal is an acceptor in Sydney and Melbourne.

Consistent sprinter All Too Royal is among the leading chances for the Listed Hawkesbury Gold Rush at Rosehill but his connections also have the option to run him in Melbourne.

All Too Royal was scratched from last weekend’s Group Three Hall Mark Stakes (1200m) at Randwick from a wide draw with a view to Saturday’s Rosehill race over 1100m.

The five-year-old has drawn barrier 10 in a field of 16 plus one emergency for the Gold Rush while co-trainers Ciaron Maher and David Eustace have also accepted with him in a 1000m handicap down the straight at Flemington on Saturday.

The stable’s Sydney representative Annabel Neasham said on Wednesday no decision had yet been made where All Too Royal would run.

But Neasham said the sprinter was in great order for his first start since finishing fourth in the Group One Oakleigh Plate (1100m) in February.

“We’ll have a look at both races,” Neasham said.

“We drew badly last week and opted to wait for this race. He hasn’t drawn that well again.

“They’ve thrown him in the race in Melbourne as well.

“The horse is in Sydney at the moment and he seems very well. Glen Boss came and galloped him on Tuesday and was very happy with his work.

“He’s a horse that likes being fresh so the gap between runs won’t be an issue.

“We’ll just weigh up which race we think is most winnable for him.”

All Too Royal has eight wins and five placings from 18 starts, with four of his wins coming in Sydney.

His past five starts have been in Melbourne including a win in the Listed Christmas Stakes (1200m) at Caulfield in December while most recently he has finished third and fourth respectively in the Rubiton Stakes and Oakleigh Plate.

He was the $5.50 second favourite behind Graff ($5) on Wednesday for the Rosehill Listed race and Neasham believes he is poised to run well if that’s where he starts.

“He’s better suited to a handicap as well than he was in a set weights and penalties race last week.

“We know him pretty well and I think he’s getting better with age.”

All Too Royal is $4.60 second favourite for the Flemington race with The Inevitable the early $3.90 favourite.