Moonlight Maid is trying to become the third filly in six years to win the Group 1 $400,000 South Australian Derby (2500m) at Morphettville on Saturday. 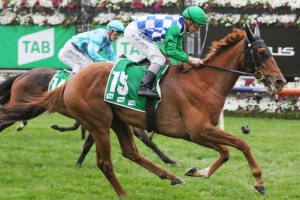 Moonlight Maid, above, is set to take on the colts and geldings in the 2020 South Australian Derby at Morphettville. Photo by Ultimate Racing Photos.

Ballarat trainer Mitchell Freedman had no hesitation in backing up Moonlight Maiden this week after the filly finished second to Toffee Tongue in the Schweppes Oaks last Saturday.

Freedman also knows that Moonlight Maid will handle the step up to the 2500m better than some of the other three year olds after she finished third in the Group 1 $1m Kennedy Oaks over that journey at Flemington during the 2019 Melbourne Cup Carnival.

“When she learns to settle she’ll be a really good stayer,” Freedman told the Herald Sun.

“In the VRC Oaks (Kennedy Oaks) she fought with the jockey for the whole race and still ran third.”

The forecast of rain for Adelaide on Friday and Saturday has also lifted Freedman’s confidence with Moonlight Maid having won her maiden at Geelong in June last year on a heavy track.

The Leon Macdonald and Andrew Gluyas trained Dalasan is the current $2.80 favourite for the South Australian Derby at Ladbrokes.com.au while Moonlight Maid is marked at $13.

Dalasan is racing in outstanding form with wins at his last two starts over 1800m and 2035m, but is yet to be tested over the staying trip of 2500m.

The post Moonlight Maid to back up against the boys in 2020 South Australian Derby appeared first on HorseRacing.com.au.