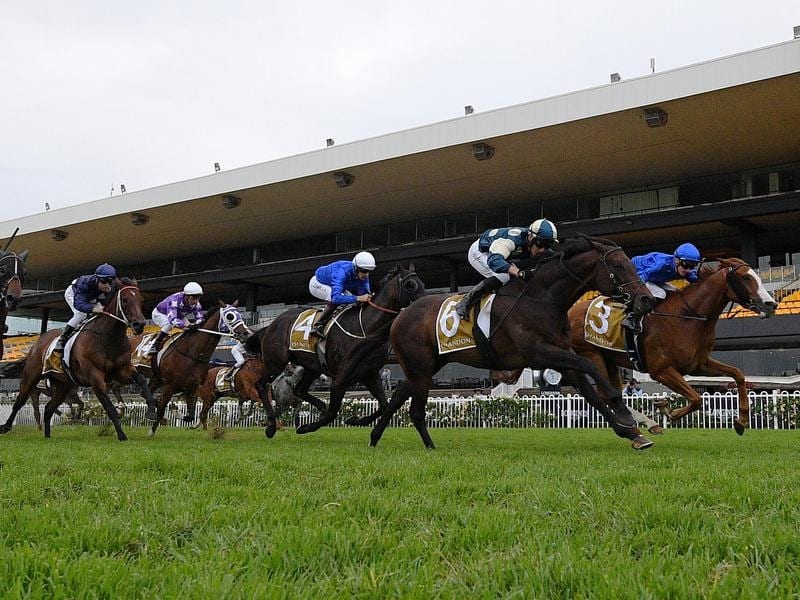 Mask Of Time (no. 6) gets his chance at a Group Three win in the Hawkesbury Cup at Rosehill.

Mask Of Time’s winning strike rate is not flash but the import’s record over the course and distance of the Hawkesbury Gold Cup suggests he will not be far away in the Group Three race.

Trained by Ciaron Maher and David Eustace, six-year-old Mask Of Time’s only win from 22 Australian starts has been a dead-heat with Best Of Days in the Group Three Coongy Cup (2000m) at Caulfield during the 2018 spring.

He won two of his 10 starts in France early in his career.

Saturday’s Hawkesbury Gold Cup is being run at Rosehill this year over 1500m, and from four starts over that course and distance Mask Of Time has registered two close seconds, a third and a fourth – all on rain-affected going.

“He was runner-up in the (Group Two) Ajax Stakes last year and he just got beaten on the line by Cascadian in the Doncaster Prelude last start,” Sydney stable representative, Annabel Neasham, said.

“He performs on good and wet tracks but he’s probably more advantaged when the tracks are wet.

“I couldn’t be happier with how he is though and Tim Clark should suit his running style.”

Rosehill is currently rated in the good range and Mask Of Time is a $12 chance in a field of 15.

The Hawkes Racing-trained mare Amangiri is the $4.80 favourite ahead of topweight Gaulois ($7) who, like Mask Of Time, is coming out of the Doncaster Prelude last start in which he finished third.

Neasham said they had waited for the Hawkesbury Cup with Mask Of Time and kept him fresh with four weeks since the Doncaster Prelude.

“We know he can get 2000 metres but he’s been working quite sharp so we decided just to leave him at that trip for another run and then he may step back up in distance,” she said.

“I think he’s in as good order as he has been. He doesn’t win that often but he is usually there or thereabouts and he’s due another win.

“So hopefully that’s this weekend.”