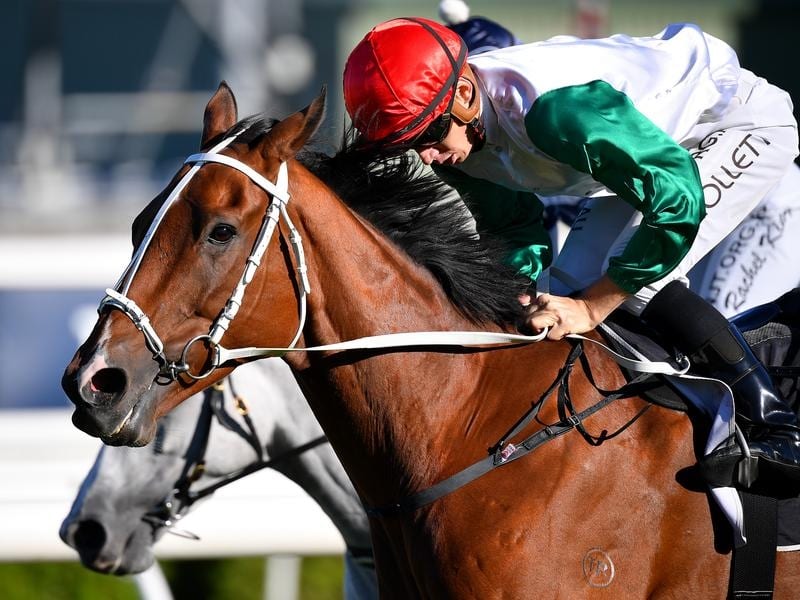 Life Less Ordinary has broken a run of outs extending almost 12 months in winning at Randwick.

Eight-year-old Life Less Ordinary has chased down Greysful Glamour to snare his first win in almost a year in the Group Three Japan Racing Association Plate at Randwick.

One of six runners for Sydney’s premier trainer Chris Waller in the field of 12, Life Less Ordinary enjoyed a cosy run under Jason Collett, midfield on the fence, from the inside barrier in Saturday’s 2000m race and set out after leader Greysful Glamour in the straight.

The Mark Newnham-trained Greysful Glamour ($6) had controlled terms in front and gave a good kick only for Life Less Ordinary ($8.50) to overhaul her in the final strides to score by a long head.

Life Less Ordinary’s stablemate Shared Ambition ($4.40) charged home from last to finish 1-1/4-lengths away third and he will be aimed towards the big spring Cups.

The imported Life Less Ordinary’s most recent win was in the Group Two Hollindale Stakes (1800m) in May last year, with Collett aboard, and Waller said his victory on Saturday was well deserved and had earned him another spring campaign.

“He’s been a great horse to us,” Waller said.

“He’s never been working any better. The boys at home have said that all week and he’s been a lot of fun, so getting today’s win is very special.

The victory was Life Less Ordinary’s ninth from 51 starts with the consistent gelding also notching 18 placings.

“He’s not quite a Group One horse,” Waller said.

“He’s a genuine Group Two weight-for-age horse but one length or two away from those really good horses.

“We found a nice race for him today and he’s duly won with a good ride from Jason who has had a bit of success on the horse.”