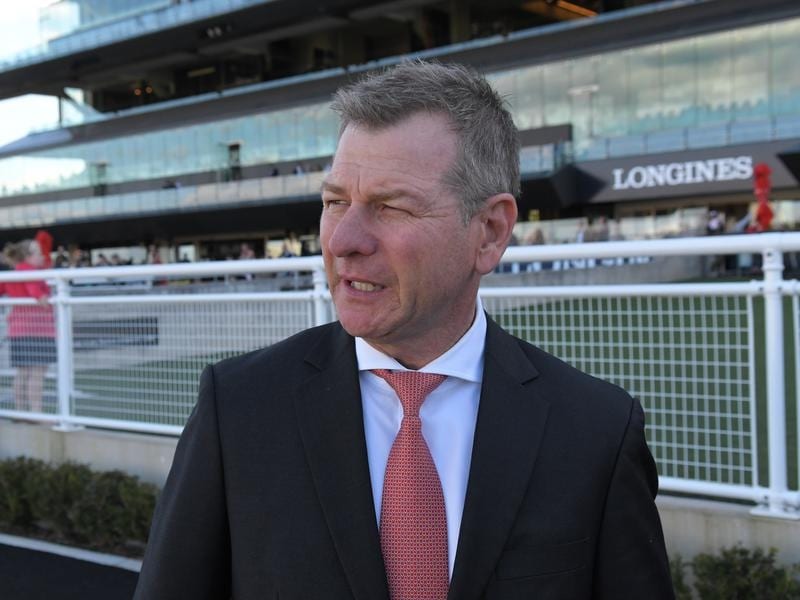 Trainer, Kris Lees is keeping a lid on expectations for two-year-old Kinloch at Randwick.

Not even a maiden performance that had to be seen to be believed can tempt Kris Lees into talking up one of his horses.

The laid-back trainer prefers to keep a lid on his untapped youngsters, and he is typically measured when it comes to two-year-old Kinloch.

Raced by a syndicate which includes Waikato Stud’s Garry Chittick, Kinloch created a big impression on debut at Newcastle, coming from a seemingly impossible position and producing a dazzling turn of foot to score convincingly.

Even Lees had to admit it was an eye-catching debut.

“I could see he was going to be a good run but he surprised me to win from where he was,” Lees said.

“He had shown us a bit, so it wasn’t a total surprise but it was a very impressive win nonetheless.”

Kinloch did enough in the 900-metre win to earn a trip to Sydney but Lees cautioned the youngster would need to go to another level on Saturday.

The two-year-old racing in Sydney continues to be strong and the Central Coast Mariners 2YO Handicap (1200m) at Randwick is no different.

Kinloch is among four last-start winners, while Ciaron Maher and David Eustace appear to have a talented first starter in Equation, who has performed well at the trials.

While Lees has a healthy opinion of Kinloch, tossing in a nomination for the Group One J J Atkins Stakes in Brisbane next month, he sees the Randwick assignment as a crucial test.

“It’s a big jump from a maiden at Newcastle to Saturday two-year-old grade and he’s going up to 1200 metres, so it will be a good guide to where he’s at,” Lees said.

“He is a pretty relaxed fellow so I’d be surprised if he doesn’t run the 1200 out strongly.”

Josh Parr has the mount on Kinloch, the TAB’s $4.60 favourite on Thursday ahead of the Chris Waller-trained Kukuracha ($5), winner of his only start at Geelong.

Ocean Emperor, one of two runners for Bjorn Baker, is at $5.50 with Equation $8.