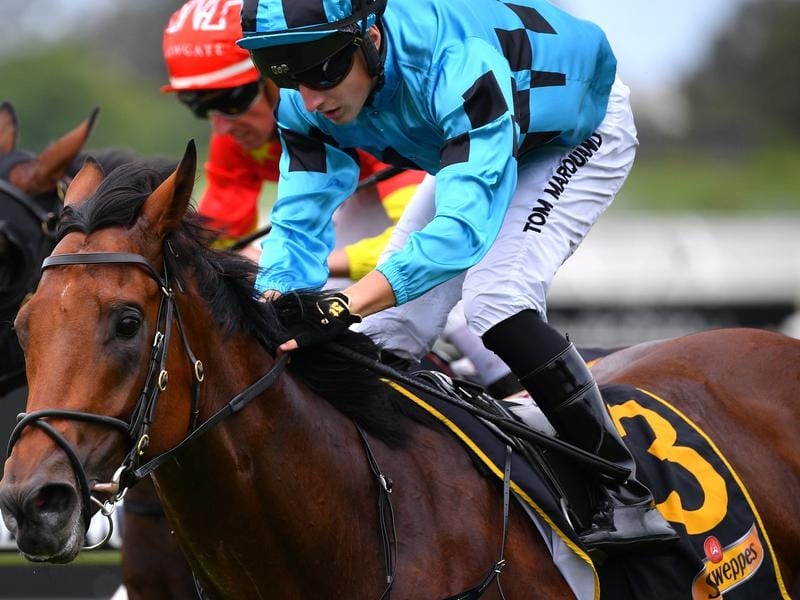 Ciaron Maher and David Eustace will rely on Holyfield in the Group One Champagne Stakes at Randwick.

Two-year-olds from the Ciaron Maher Racing team have been to the fore in a host of feature races this season but a juvenile Group One win has so far eluded the stable.

Holyfield gets the chance to change that in Saturday’s Champagne Stakes (1600m) at Randwick, the fourth of five Group One races for two-year-olds in Australia for the season.

Maher and co-trainer David Eustace had six runners in the Group One Blue Diamond at Caulfield in February with Magic Millions Classic winner Away Game finishing best in fourth.

The stable has had second placings in both the Sydney Group One races for two-year-olds.

Away Game was runner-up in the $3.5 million Golden Slipper, in which the stable had four runners, while Prague was second in the ATC Sires’ Produce Stakes.

Holyfield is their only runner in the Champagne (1600m) and he is one of several two-year-old stakes winners from the stable this season.

Star filly Away Game has three black-type wins, Prague has won two Group races and Rathlin, Tanker and A Beautiful Night have all won at stakes level.

“We’ve had a great season and won a lot of the races but that Group One juvenile win still eludes us so hopefully it’s this weekend,” the stable’s Sydney representative Annabel Neasham said.

Holyfield stamped his Champagne credentials with a tough win over subsequent Fernhill Mile winner Untamed in the Group Three Baillieu (1400m) at Rosehill on March 28, his third win from four starts.

Connections bypassed the Sires’ Produce a week later to target the Champagne.

Sires’ Produce winner King’s Legacy shapes as the hardest to beat in the field of 10 but Neasham believes it is an open race.

“I think the three weeks spacing between runs will be ideal for him,” Neasham said.

“It allowed us to give him a week out in the paddock just to recover and freshen up and he looks like he’s strengthened up again.

“He worked with an older horse on Tuesday and his work was very pleasing so I think he has improved.

“I still think there’s improvement in him into next season but I wouldn’t be surprised if he won this race.”

English jockey Tom Marquand won on Holyfield last start and will be out to cap his autumn carnival in Sydney with a third Group One win having won the Ranvet Stakes and Queen Elizabeth Stakes on the William Haggas-trained English horse Addeybb.

Marquand’s book of rides on Saturday includes the Matthew Smith-trained Fierce Impact in the Group One All Aged Stakes.