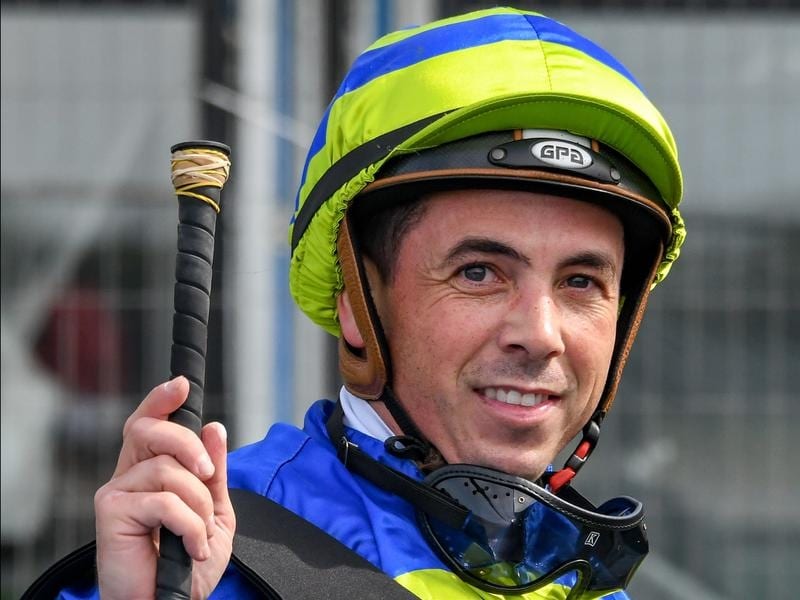 Dean Holland will ride Away Game in the Group One Robert Sangster Stakes at Morphettville.

South Australia’s best races have special significance on more than one level for jockey Dean Holland.

After starting his riding career in Adelaide, Holland has forged a successful career in Victoria.

But it is in his former home town where Holland has landed some of his biggest wins.

His solitary Group One victory came aboard Small Minds in the 2010 Australasian Oaks with Adelaide Cup wins aboard Tanby and Surprise Baby.

Ciaron Maher, who with David Eustace trains Away Game, lured Holland to Adelaide to ride the two-year-old filly at 47kg in the Group One Sangster Stakes (1200m) at Morphettville on Saturday.

Away Game has won four of her seven starts including the Magic Millions 2YO Classic at the Gold Coast in January while also running second to Farnan in last month’s Golden Slipper at Rosehill.

The filly is coming off success in the Percy Sykes Stakes at Randwick on April 11.

“I was driving to Geelong races when I got the call and I said to Ciaron that I’d get back to him that night,” Holland said.

“After ringing my manager it took me 10 minutes to make up my mind.”

To take the Away Game ride, Holland, his family and fellow Victorian riders John Allen and Ethan Brown are required to undergo two weeks of isolation because of COVID-19 rules in place in South Australia.

The three jockeys, who exit lockdown on Friday night, have an exercise course they complete twice a day.

“There’s a couple of cardio programs online that we do which burns a bit of fat,” Holland said.

“I started a diet a week and a half ago and I’m down to 49 (kilograms) without having to push it.

“But I’ll start tightening it up a bit more now.”

Away Game is the $6 second favourite behind multiple Group winner Sunlight at $3.

Holland sees the barrier draw as important with Away Game in gate four and Sunlight in 16.

“I couldn’t have asked for a better barrier,” Holland said.

“I’ll be looking to find somewhere around Sunlight’s back and rate her.

“She’s a little weapon, a tough little horse by the look of her.”