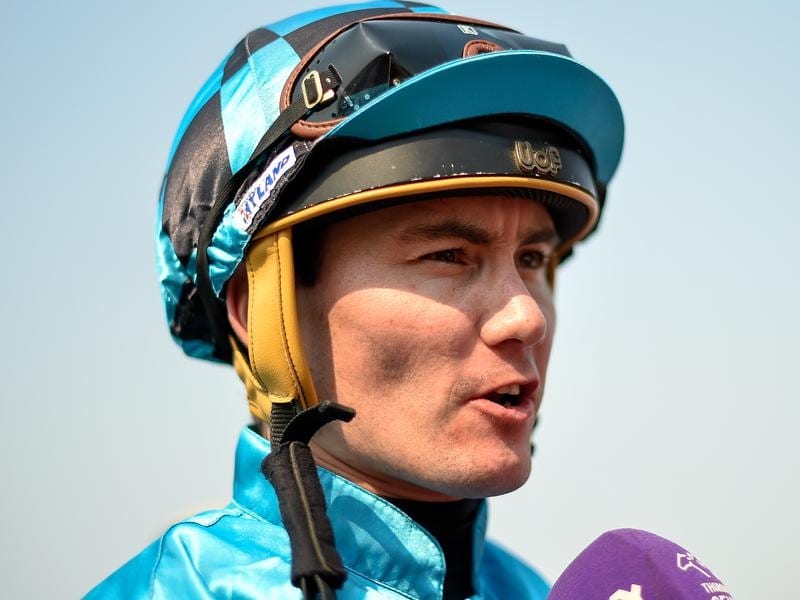 Micheal Hellyer hopes a commanding win on the Sunshine Coast is a good omen for the Stradbroke Hcp.

Jockey Micheal Hellyer is hoping Amiche’s runaway win at the Sunshine Coast is an omen for far bigger things next month.

Amiche is a half sister to top mare Baccarat Baby who is headed to the Group One Stradbroke Hcp on June 6.

Both are trained by David Van Dyke and owned by the Harris Family Racing syndicate.

Stable foreman Patricia Gesler said Van Dyke had a big opinion of Amiche who was headed for Saturday class.

Hellyer is booked to ride Baccarat Baby who has 51kgs in the Stradbroke.

“I have been on a diet and doing plenty of work outs to get down to the weight,” he said.

“Baccarat Baby is 33rd on the list of qualifiers so I am hoping she will make the Stradbroke field.”

Promising filly Makeup had never raced on a heavy track but trainer Gary Doughty was confident she boasted the family history to indicate she would be a genuine mudlark.

And Makeup ($6) proved Doughty a good judge when she ploughed through the heavy 10 track to win the QTIS Three-Years-Old Maiden Hcp (1400m).

Doughty owns Makeup’s dam Natural Glamour and after a solid racetrack career she has proved to be a very good broodmare.

“Makeup is out of Natural Glamour making her a half sister to Arki, Where’s That Dragon and Natural Force who were very good in the mud,” Doughty said.

“The whole family raced best with blinkers and we put them on Makeup today. So I was pretty confident even though she had never raced on a really heavy track.”

Tough mare Takeittothelimit ($3.70) also lived up to her bloodlines to give Tony and Maddy Sears the 54th winner for their first season in a training partnership.

Takeittothelimit is a full sister to stakes winning gelding Pardoe who won four races in a row as a two-year-old before being sold to Asia.