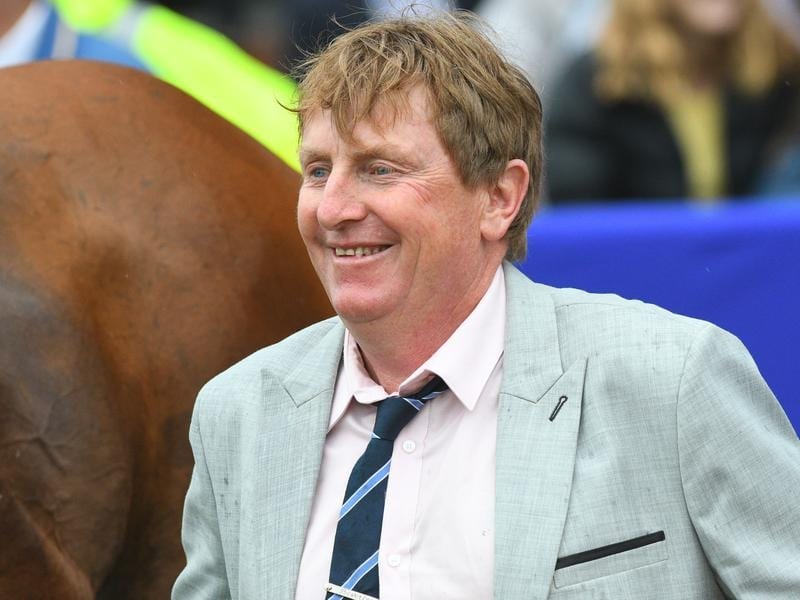 Trainer Mick Bell will give veteran sprinter Jungle Edge his shot at the Group One Goodwood.

Trainer Mick Bell will rely on a little-known Adelaide trainer to keep Jungle Edge in peak condition for a shot at the Group One Goodwood at Morphettville.

Jungle Edge won his first South Australian start on Saturday, leading throughout in the Group Three D C McKay Stakes (1100m) with apprentice Georgina Cartwright aboard in an ideal trial for The Goodwood (1200m) at Morphettville on May 16.

Because of coronavirus protocols stopping Bell crossing into South Australia without undergoing two weeks isolation, he was forced to find a suitable stable for Jungle Edge.

“I’m very happy with the situation the way it has worked out,” Bell said.

“He seems very happy there and Leah is treating him like the king he is.

“I’ve never met her but we’re getting on very well. She’s only got one horse and a couple of ponies apparently.

“Already he’s become a bit of a celebrity over there. Even before he raced she said there were people wanting to have their photo taken with him.”

Jungle Edge is at $18 in Goodwood pre-nomination betting despite the ease with which he won on Saturday.

“There’s been at least ten times that people have said he couldn’t do it, or he wasn’t good enough, but he’s proved them wrong.

“The way the Goodwood is looking and the way the weather is shaping we might get a similar sort of track (soft).

“He makes his own luck and puts himself in the race but Group One races are hard to win. There is always a lot more pressure in them.”

Bell said Cartwright would retain the ride in The Goodwood unless the protocols were relaxed to allow Victorian jockeys to go to Adelaide without undergoing two weeks isolation.

He said Jade Darose would be reunited with Jungle Edge if those conditions changed.

“I’d love to be going over myself, but I doubt anything will change,” Bell said.