But it was ‘second string’ Yozo Bale who upstaged his champion kennelmate, Tiggerlong Tonk, in the keenly contested $50,000-to-the-winner final.

“He’s an up-and-coming dog,” Grenfell said. “I’m glad he’s done this so early in his career.”

Grenfell added that it was no disrespect to Yozo Bale, but he thought Tiggerlong Tonk was his best chance. It was the first time he’d had two greyhounds in a group race final.

Grenfell and his wife Samantha, 30 – who handled Yozo Bale – had to secure a babysitter for their four children for the night. And there were quips after the race that the ‘nanny’ may receive a sling once they got home.

Grenfell finished fourth with champion Orson Allen – the greyhound who really put the Grenfells on the map in the sport – in the 2018 Bendigo Cup.

Orson Allen’s racetrack feats allowed the hard-working Grenfells to purchase a 51-acre property at Mount Wallace. They now have 50 greyhounds in work on their complex, which is just over 30km from Bacchus Marsh. 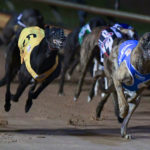 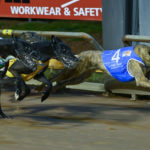 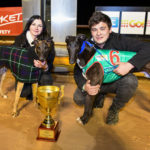