The first ever Grand Prix at Addington is  over, and there have been New Zealand records, five wins for the All Stars barn and doubles for drivers Ben Hope and Tim Williams. Here is the day race by race. 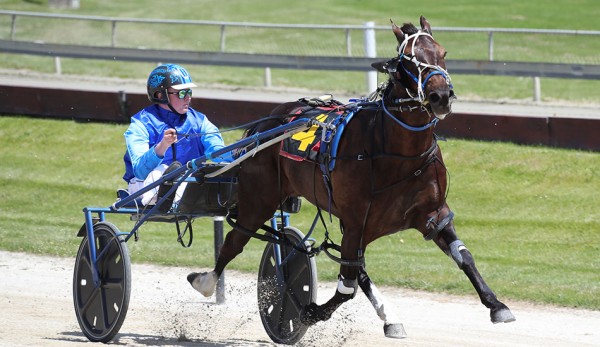 It was all hot favourite Celtic Spirit to kick off Grand Prix Day. Trained by Greg and Nina Hope, and driven by son Ben, Celtic Spirit speared to the lead from the mobile, controlled the tempo and then waltzed away to win easily, paying $1.80 and $1.40. Teds Legacy who sat parked battled well to finish second, from Bettor Believe It who trailed Celtic Spirit. The winning time for the 1980m was 2:24.10.

The Paul Nairn-trained and driven Confessional took out the day’s first Group 1. Starting off the unruly Nairn circled the field with under a lap to go and took the lead off hot favourite Gold Bullion. The two looked set to fight out the finish before Gold Bullion galloped in the home straight with Confessional going on to win comfortably. Southern Diamond ran on well to finish second with another Nairn runner in Tectonic third. Confessional paid $8.40 and $2. The winning time for the 1980m was 2:25.50. 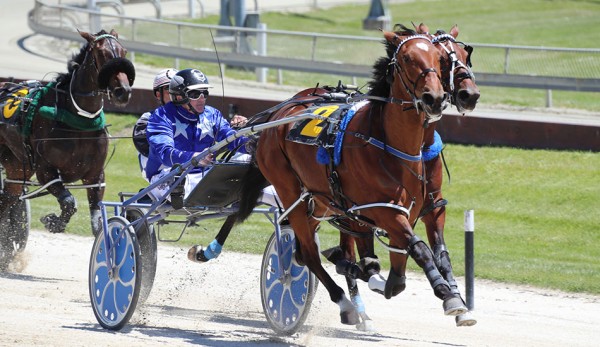 Millwood Nike again showed what a star she is with a New Zealand record-breaking win in the Group 1 for the two-year-old pacing fillies. The All Stars-trained filly is now unbeaten in all eight career starts and she couldn’t have been more impressive. Mark Purdon had to sit parked for the majority of the trip as Aardiebytheseaside and John Dunn forced the issue out front. She then ran down the leader to win by one and three quarter lengths in a new record of 2:20.3 for the 1980m. As Purdon said post race “the win just caps off a wonderful year”. The shortest priced favourite of the day, Millwood Nike paid just $1.10 for the win. Steve and Amanda Telfer-trained stablemates Aardiebytheseaside, Kahlua Flybye and Forever Me finished second, third and fourth.

It was billed as one of the day’s most open races and it was Nazareth, paying $26.60 and $6.50, that came with a telling burst to win the NZ Derby for the trotters. There was a false start after two of the favoured runners Hot To Trot and Highgrove both galloped behind the mobile. Take two also had its dramas with Hot To Trot, Double Delight and Masterly among those to make mistakes. Con Grazia Love set the pace only for Mystic Max to make his move. He looked the likely winner 100 metres out only for Nazareth to produce out wide. “The gaps came our way late in the piece and we managed to get over the top of them,” says winning driver Tim Williams. It was a great result for trainers Robert and Jenna Dunn and an emotional one for Williams. “It’s so good winning a Group 1 for RJ’. The Dunns also produced Highgrove to finish third, just behind Mystic Max. The winning time was 3:13.40 for the 2600m, another national record. 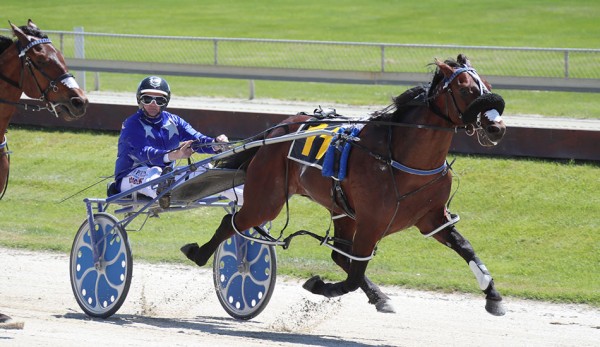 Race 5 : The Crossing Ace of Spades 2YO Colts and Geldings (Group 1) :

The All Stars dominated this Group 1, filling the top five places. The outstanding Don’t Stop Dreaming made it six wins from just seven starts. Having a tricky second row draw was no problem for Mark Purdon as he went round the field and took the lead from stablemate and favourite Sherlock. It was Purdon’s second win for the day, following on from Millwood Nike. Sherlock couldn’t peg back the deficit in finishing second from stablemates Sinbad, Final Collect and Vinke B. The winning time for the 1980m was 2:19.6. 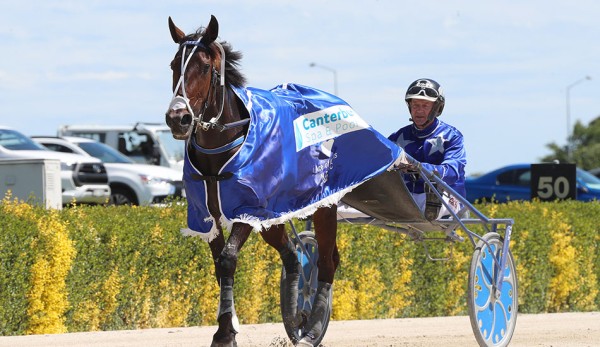 “Mammoth” was how commentator Matt Cross described High Energy’s win in Race 6. The short priced favourite was in a seemingly hopeless position at the 900 before Mark Purdon launched four wide to go around the field and then put them away in the home straight – and all in a new New Zealand record. The winning time over 1980m was 2:26. It was Purdon’s third Group 1 winning drive of the afternoon and the third training success for Purdon and co-trainer Hayden Cullen. It also extended High Energy’s unbeaten streak  – she has now won all five career starts. The Ivy League ran on well to finish second, with Shez Bella third. 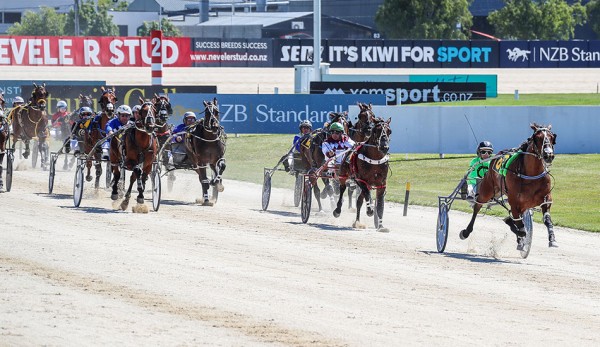 It was meant to be one of the closest races of the day but Akuta made no race of the NZ Derby, winning by more than six lengths. At one stage arch rival Republican Party was out front with Akuta last and 30 lengths off the lead. Akuta’s co-trainer and driver Mark Purdon did not seem fazed as he went round the field three wide with cover and then just gobbled Republican Party up when it mattered. The winning time was 3.05.6 for the 2600m and gave the All Stars and Mark Purdon their fourth Group 1 for the day. 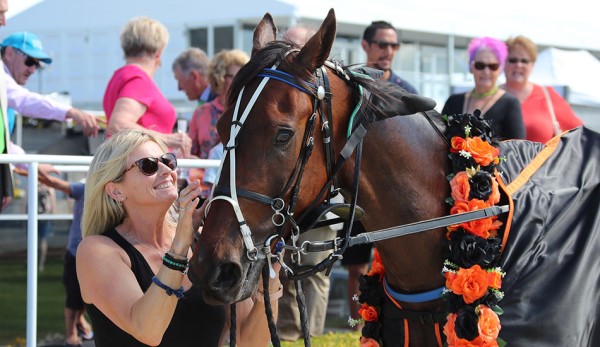 After being backed as if unbeatable Muscle Mountain gave his supporters no cause for alarm in dominating the day’s feature trot, the NZ Free For All. It was the second win for the day for the Hopes – Greg Nina and Ben –  and the third win on Grand Prix day for high profile owner Ian Dobson. His previous wins were with Don’t Stop Dreaming and Akuta. Muscle Mountain was just too classy as Ben Hope went straight to the lead and wasn’t handing up to anyone. The winning time of 2:29.9 for 1980m was yet another new New Zealand record. Time Up The Hill ran her best race for some time in finishing second with Majestic Man third. Muscle Mountain paid $1.30 and $1.20. 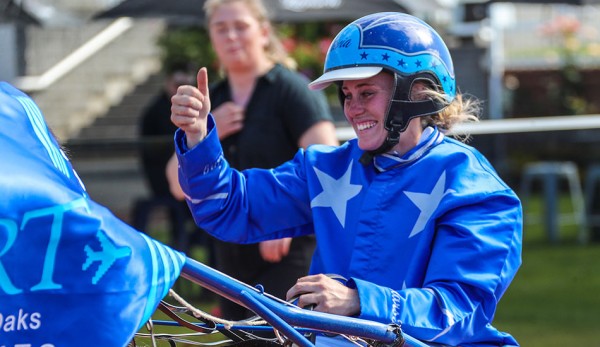 On a day when the All Stars could do little wrong it was the little fancied No Matter Wat and Olivia Thornley who triumphed in the New Zealand Oaks. It was the Blue Army’s fifth win on the day. No Matter Wat, one of five runners in the Oaks for the Purdon-Cullen combo, romped away to a six length lead at one stage and looked to be pulling badly. But in the words of Thornley she “just keep trucking” to upset at $17.10 and $2.90 by three quarters of a length. Stablemate and hot favourite True Fantasy ran on well to finish third, as did Obsession in finishing second. The winning time for the 2600m was 3:08.80. It was Thornley’s first Group 1 victory.

Tim Williams made it win number two for the day when B D Joe upset the Blue Army as the country’s top pacers battled it out in the Summer Cup. The $2.20 favourite had to go four wide in the concluding stages but produced a telling burst to ran down Self Assured. It was a timely return to form for the Team Telfer-trained star who had raced without luck during Cup week. Self Assured finished second after a tough run parked, with stablemate Spankem third. The winning time for the 1980m was 2:18.5.