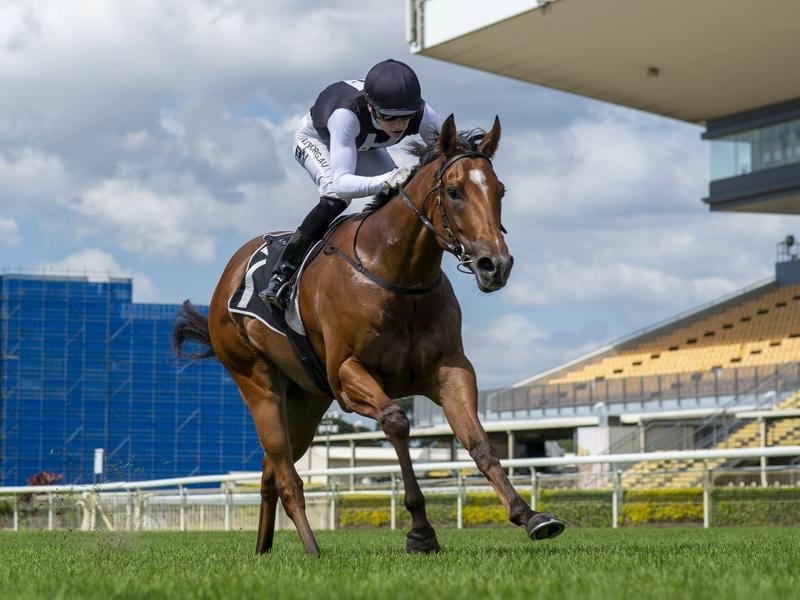 Impressive debut winner Isotope will take on some more experienced rivals at the Sunshine Coast.

A strong trial by filly Gotta Kiss has set the stage for an exciting showdown with Isotope at the Sunshine Coast.

The pair clash in Saturday’s QTIS 2YO Handicap (1000m) which will be a forerunner to stakes races in the winter.

Both are likely to chase races such as the Group Two Champagne Classic on May 23 and the Group One J J Atkins on June 6.

Gotta Kiss trialled on Tuesday, and, early in her heat, was about eight lengths off the leaders who went at a fast pace.

Stephanie Thornton let Gotta Kiss run home under a grip and Gotta Kiss made up six lengths to finish second.

Trainer Steve O’Dea has been planning to ride Gotta Kiss conservatively and was happy with the result.

Gotta Kiss won two of her first three starts before finishing a well-beaten 12th in the Magic Millions 2YO Classic.

Isotope won her only start by 10 lengths at Doomben last Saturday week, running fast time on a soft track.

Trainer Tony Gollan believes Isotope will have no problems getting out to distances such as 1400m but she is ready to fire on Saturday.

“I was originally thinking of the Magic Millions with her but she wasn’t ready. So we turned her out with the winter in mind,” Gollan said.

“It should pay off in the coming weeks and she is a winter horse for sure.

“Isotope’s dam is a half-sister to Yankee Rose who won the Group One ATC Sires’ Produce and Group One Spring Champion Stakes so on breeding she should have no trouble at 1400 metres.”