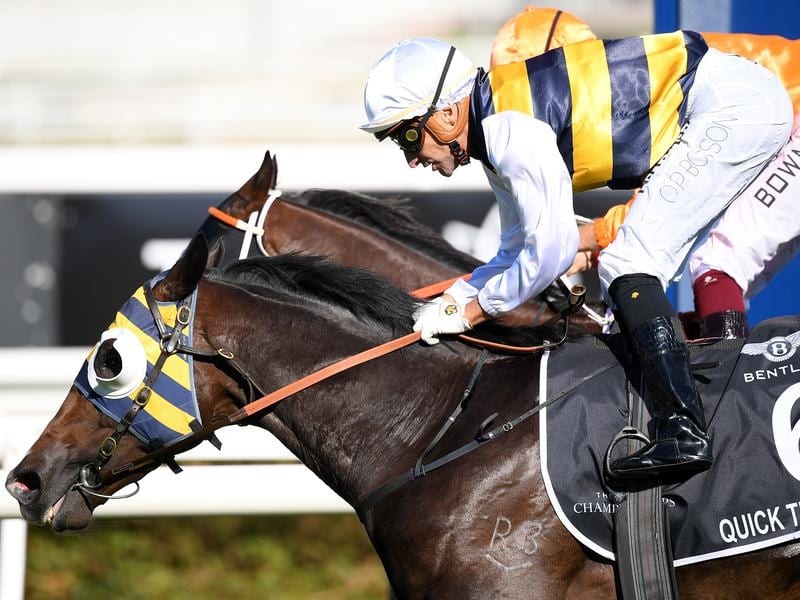 Derby winner Quick Thinker is not who Mark Newnham wanted Gone Bye to meet in the Frank Packer.

Mark Newnham has had the Frank Packer Plate as Gone Bye’s autumn goal for some time but admits he was not expecting the gelding to be taking on a Group One winner.

Quick Thinker, winner of the Australian Derby, headlines Saturday’s nominations and is the even-money favourite ahead of acceptances on Wednesday.

The Murray Baker and Andrew Forsman-trained colt will be chasing his third-straight feature win on Saturday after the Group Two Tulloch Stakes (2000m) and Group One Derby (2400m) on soft and heavy tracks.

“That was a surprise to see him there,” Newnham said.

“I would say if we get another wet track we probably can’t beat him but as the track dries out it probably gives everyone else a better chance.”

Gone Bye has won three of his five starts, including a 1600m-race at Warwick Farm last Wednesday.

“He’s a really nice, improving horse and I’ve had this race in mind for him for quite a while,” Newnham said.

Newnham initially planned to get Gone Bye to the Frank Packer Plate via the Group Three Carbine Club Stakes (1600m) on April 4 but that changed when the gelding’s second-up run was delayed.

After a seventh in the Canberra Guineas (1400m) he was scheduled to race over 1600m at Warwick Farm on March 25 but the races were abandoned mid-meeting.

Gone Bye was then scheduled to run the following Wednesday at Rosehill but that meeting was washed out after one race so he eventually ran in a 1600m benchmark-70 at Warwick Farm.

“He did a good job at Warwick Farm because he had not raced for a month and he was going up in distance on a heavy track. That’s not usually a recipe to be winning,” Newnham said.

“He’s managed to beat older horses in his last two wins and he will appreciate going up to 2000 metres.

“It’s a fair jump in grade but I think he’s quite a capable horse.”