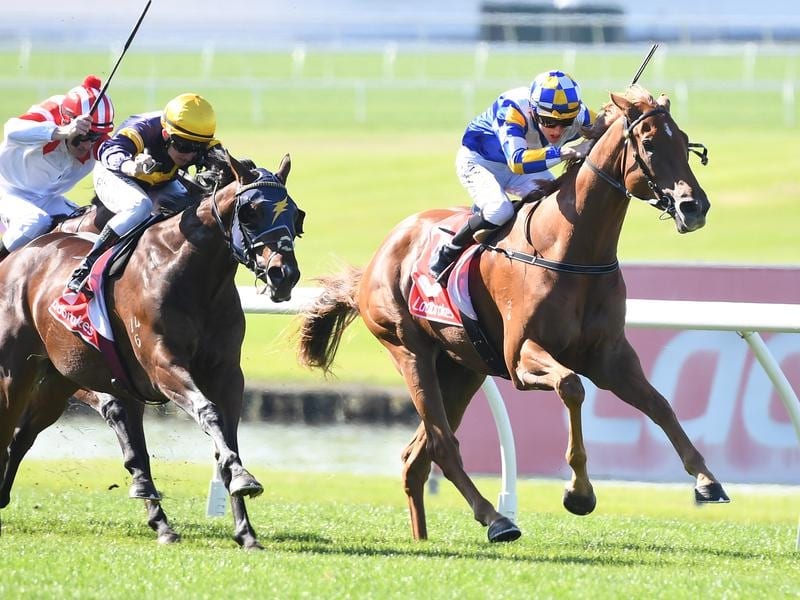 Final Man (r) is shooting for a hat-trick when he runs again on a wet track at Sandown.

A wide draw in a sprint race at Sandown usually sounds a warning for connections.

But trainer Nick Harnett is not put off by gate 17 with Final Man in the Salute Frontline Workers Handicap (1200m) on Saturday.

“It may turn out to be the best spot come that stage of the day,” Harnett said.

“There will probably be some scratchings so he’ll come in a few, so it should not be too bad.”

Final Man is engaged in race seven on Saturday’s program on a track already rated in the heavy range.

Harnett does not see a heavy track being a hindrance for Final Man after his success at Pakenham on that type of track before he opened his metropolitan account over Saturday’s course and distance on April 13.

Final Man accounted for two of his Saturday rivals, Alburq and Southern Legend, that day on a soft track.

Harnett said Final Man, who stands 17.1 hands and is the winner of three of his six starts, had put on weight since his latest outing.

Harnett said connections had again considered claiming and if Stockdale was available he would have been aboard.

“Three kilos would have been ideal but the only apprentice I could get was only going to take 1.5 (kilos) off, so when the opportunity came to get Damien, we grabbed it,” Harnett said.

“This is a good field and I suppose if these horses can’t travel to Brisbane or Adelaide, they’ll stay here making it a very competitive winter.

“It would be good to get a Saturday city win on the board and if he’s going to run in better races he’s going to need to win these sort of races to build his rating.”