Team Snowden are likely to back up tough two year old Untamed in next week’s Champagne Stakes after the colt scored a narrow win in the  Listed $150,000 Cellarbrations Fernhill Mile (1600m) at Randwick on Day Two of The Championships today. 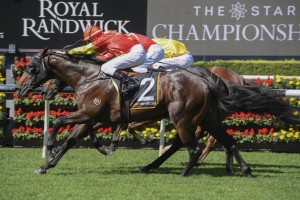 Untamed, above, is set to back up in the Champagne Stakes after winning the Fernhill Mile at Randwick. Photo by Steve Hart.

Untamed was a drifter in the betting for the Fernhill Mile with his price easing from $3 to start at $3.60 but he was able to defy that betting drift to record a last stride win over the Brad Widdop trained Wheelhouse ($15) with Fayerra ($8.50) a nose away in third spot.

The well supported $2.60 favourite Postcode set the pace but faded in the straight to be a well beaten fourth.

Today’s win in the Fernhill Mile has seen bookies at Ladbrokes.com.au wind in Untamed price from $8 to be the third pick at $5 for the Group 1 $400,000 Moet & Chandon Champagne Stakes (1600m) at Randwick next Saturday.

Tim Clark was quick to let Postcode take up the running from the outset while Nash Rawiller on Untamed was happy to settle the Peter and Paul Snowden trained colt in fourth and fifth position in the early and middle stages.

Sam Clipperton made a move at the 600m on runner up Wheelhouse who attacked Postcode on the home turn while Rawiller was still sitting quiet on Untamed.

Untamed held his ground until the 300m when Rawiller asked for an effort and the Pierro colt responded and found the line just in time to record a nose win in a three way photo finish.

Co-trainer Paul Snowden is now keen to back up Untamed in next Saturday’s Group 1 for the two year olds.

“There is every chance (to back up in the Champagne Stakes). We spoke about it last week. If he won today it would definitely be an option there for him if he pulled up well enough to back up next week and take his place,” Paul Snowden said.

“It looks like there is not going to be a massive field in numbers and hopefully I would like to see him take his spot.”

“We have stepped him out to trip that he really enjoys now, anything up to 2000m this horse.”

“He was going to get there, it was just a matter of when and he just got there on the line.”

“He always has had a tendency to relax in his races and hit the line so we are pretty confident up to mile and a little bit further.”

The post Fernhill Mile winner Untamed to back up in 2020 Champagne Stakes appeared first on HorseRacing.com.au.