Extra Time has earned himself a break after scoring an all the way win in the Group 3 $120,000 M&J Chickens National Stakes (1200m) at Morphettville today. 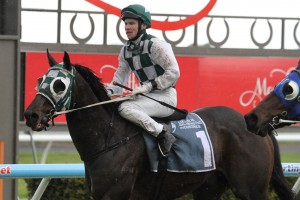 Jockey Jason Holder, above, was aboard Extra Time for an all the way win in the National Stakes at Morphettville. Photo by Jenny Barnes.

Winning trainers Leon Macdonald and Andrew Gluyas put the blinkers on Extra Time today and the Shooting To Win two year old responded with a sustained boost of speed to break through for his maiden win at his fourth race start.

Macdonald said that Extra Time deserved that win and he would most likely send the gelding to the paddock for a break.

“The horse has been racing really well without much luck,” Macdonald said.

“I think the blinkers made all the difference to him.”

Macdonald noticed that Extra Time was racing a bit keen for Jason Holder in front with the blinkers on but when the rest of the field was under pressure trying to keep in touch on the home turn, he knew his youngster would be hard to run down.

“He looked to be a bit too keen to me, but by the time they got to the corner, I had a look back through the field, there was a lot of horses under pressure and I said oh well, he will keep going,” Macdonald said.

Extra Time was a slight drifter in the betting and eased from $6 to start at $7 and had almost three and half lengths to spare on the line.

Expensive yearling purchase Kazuhoki ($4 favourite) ran on from midfield to claim second spot just ahead of Hard Rock Girl ($11) who battled on okay in the run to the line.

The post Extra Time scores an all the way win 2020 National Stakes appeared first on HorseRacing.com.au.