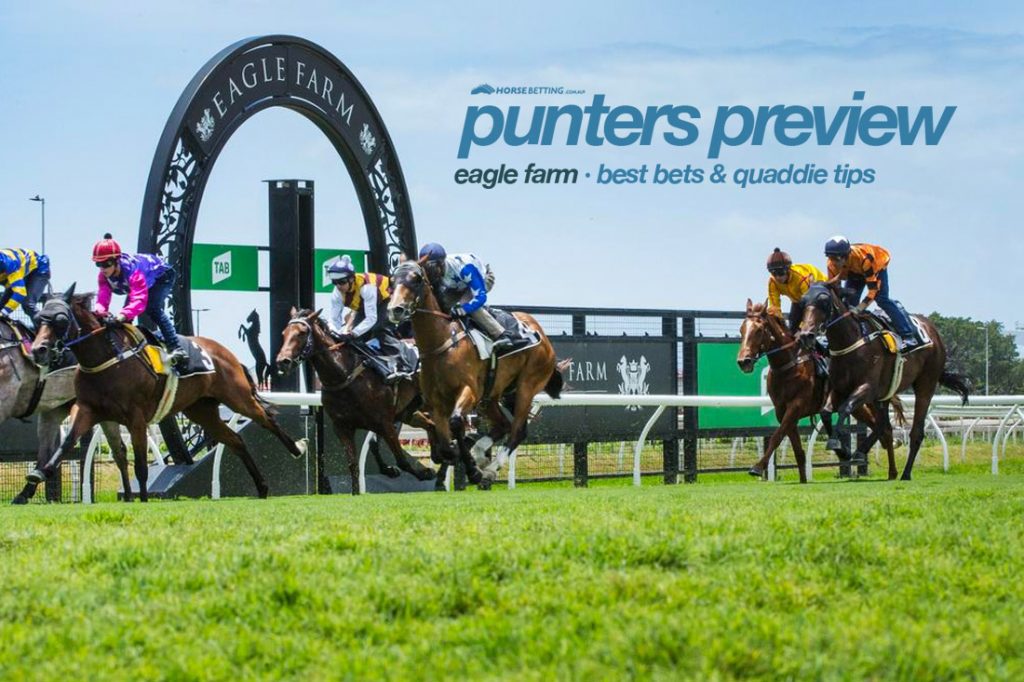 It is a quick turnaround for Eagle Farm Racecourse this week, with nine metropolitan races scheduled to be run and won there this Wednesday, June 29 – four days after Saturday’s Group 1 Tattersall’s Tiara meeting. HorseBetting’s Queensland racing analyst looks to find you a few winners throughout the afternoon, with his best bets and suggested quaddie hopefully able to close out the month of June on a winning note. The track is rated a Good 4 and the rail is out 10m for the entire course. The first of nine is scheduled for 11:58am AEST.

Considering at the start of the carnival, Go Wandji was being touted as a potential Stradbroke Handicap (1400m) prospect, it should make him hard to beat in a midweek Class 5 Handicap. The Tom Dougall-trained galloper is yet to miss the place in nine starts, winning six of them – one of which was at this track in November last year. The son of Wandjina is unbeaten first-up, the two and a half months between this and his last run should have him fresh and ready to fire. The four-year-old will land midfield or worse form barrier four, which should see him out with plenty of room in the straight under Larry Cassidy to let down with his terrific turn of foot and go home a winner once again.

Tony Gollan and Jim Byrne combine in the last with promising stayer Sir William Bruce. The four-year-old entire by Galileo has only won one race, saluting over 2414m at Leopardstown in May 2021 under Ryan Moore. In his two Australian starts, Sir William Bruce has been a touch unlucky both times over unsuitable distances of 1350m and 1600m respectively. Now stepping out to 1800m in Class 2 grade, Gollan’s galloper should be almighty hard to beat. Byrne can cuddle the entire for most of the 1800m journey from barrier two, provided he gets the big strong horse out with enough time to put in the big bounds. This is a very suitable race for him third-up.

Next Best Again at Eagle Farm – Be Water My Friend

In the opening leg of the quaddie, Mark Du Plessis reunites with last-start runner-up, Be Water My Friend. The Matthew Park-trained four-year-old kept hitting the line over 1050m first-up at Doomben, getting to within two-tenths of a length of Rapid Response. Although it looked as though the son of Headwater was looking for a bit further now, he stays at 1000m – a distance he’s yet to miss the placings over – while he will strip fitter and should appreciate the longer straight at Eagle Farm. Drawn wide in barrier 11, Du Plessis will go back towards the rear and look to unleash the big chestnut late.