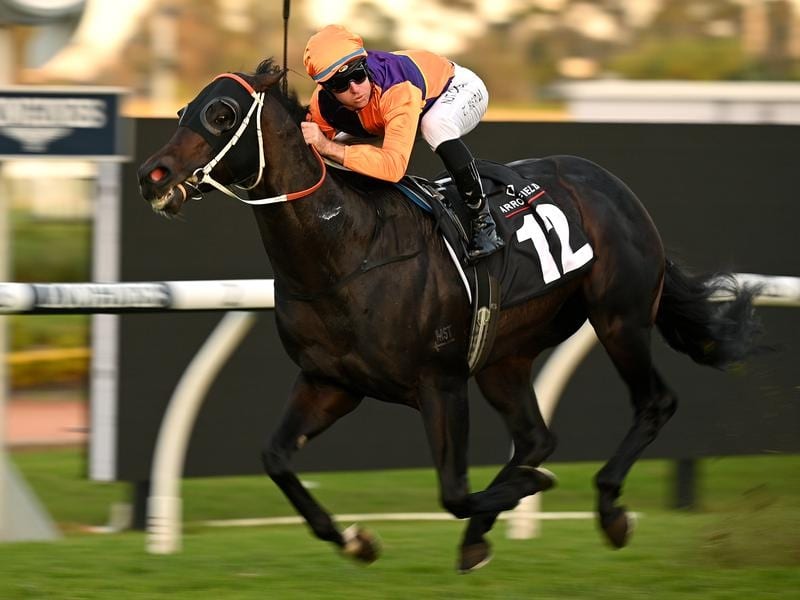 Dirty Work has made a one-act affair of the Listed Ortensia Stakes over 1100m at Rosehill.

One of Sydney’s most improved sprinters has salvaged a consolation win for Hawkes Racing after the Rosehill scratching of a high-profile stablemate.

Dirty Work arrived as a bona fide black-type horse in winning the Listed Ortensia Stakes, an 1100m scamper that was the last of 17 races run as part of the Scone Cup carnival.

In beating Star Boy and Bon Amis, Dirty Work delivered on early-season potential and eased the stable’s frustration after Masked Crusader was withdrawn from the Inglis 3YO Guineas.

Masked Crusader could not keep his appointment as one of the warmest favourites across Saturday’s meeting because of a stone bruise.

Co-trainer Michael Hawkes said it was a minor setback to Masked Crusader’s expected rise to the top.

“The horse is well and we’ll take a couple of days and hopefully it is onwards and upwards,” Hawkes said.

Dirty Work posted a Group Three placing in Melbourne in August but his sudden end-of-carnival form surge, that includes wins at his past three starts, has surprised even his jockey Tommy Berry.

“If you had told me he was going to do this at the end of his last prep, I wouldn’t have believed you,” Berry said.

“Even from the horse I rode two starts ago to today, the difference is chalk and cheese.”

From a rails draw, Berry had Dirty Work camped behind the leading division and with the benefit of that economical run, along with an uninterrupted inside passage, the colt scooted away for a 2-1/2 length win.

Glen Boss fell foul of stewards and was suspended for 10 meetings on two separate careless riding charges stemming from races one and eight.

He will ride at Randwick next Saturday before beginning the dual penalties and can return on June 11.