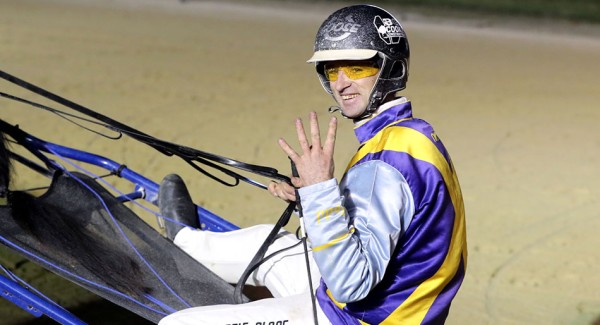 Robbie Close’s brilliant form in the sulky looks set to continue at Addington on Sunday.

The reinsman put on a driving masterclass at Canterbury’s headquarters on Friday night with four outstanding winning drives.

Victories with Skittle Bomb, Evangalist, Victor Bravo and Hail Lucius completed the first bag of four winning drives of Close’s career and it came during a season in which he is scoring at a career-best strike rate.

“It was a great night, everything doesn’t always fall into place as well as that but everything worked out great,” Close said.

“They are all definitely nice horses and going up in the grades.”

The reinsman goes into Sunday’s meeting with 49 wins this year with more than six months of the new season still to go.

“It has been amazing how the season has ticked along.”[

“All I wanted to do was beat last year’s number, I thought that was pretty big – 89 wins.”

“I thought if I could beat that it would be a pretty good effort.”

“With six months of the season to go it looks like I could beat it, so hopefully it continues.”

Close takes just three drives at Sunday’s meeting though there is quality among them.

Two are for the in-form Matt Purvis stable which produced both Victor Tango and Tommysonaroll to win on Friday night.

The Purvis pairing of Pocket Call and Violet Knight and the Coaster Howe trained Yankee Jay each look genuine threats for Close.

“Matt’s team is flying and both of his horses could definitely run in three and Coaster’s one won well in her last start and I don’t think she will worry about the jump up in grade.”

Pocket Call brings ordinary form to his first start for the Purvis stable in race 7.

But the pacer reeled off good sectionals when winning a recent trial with Close in the sulky.

“He trialled very nice, he lacks a bit of intelligence to go forward but if you keep driving him he will keep going.”

Violet Knight produced a huge third after a mid-race break in his last start third at Addington last weekend.

With his best manners the pacer looks a massive winning chance in race 8.

“He has more tricks up his sleeve than I don’t know what, but if all the stars align he can definitely win.”

Frank Phelan holds the series lead heading into the last day of racing.