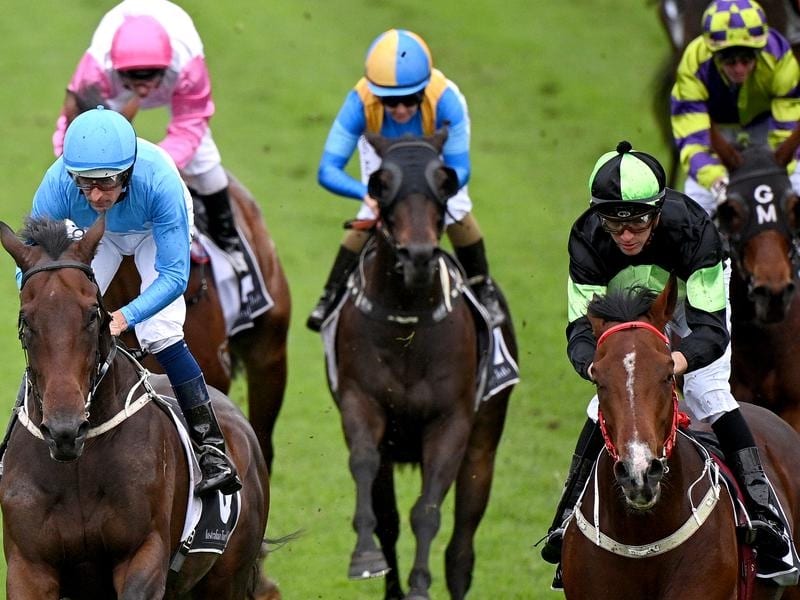 Jockey Sam Clipperton has ended a run of outs with Stockman (right) winning at Randwick.

A patient ride aboard Stockman has helped Sam Clipperton to break a run of outs and land his first metropolitan win since Anzac Day.

Clipperton has been happy with his form but the depth in the Sydney jockeys’ ranks has made getting on the better chances challenging.

“I have been getting good support without getting on the prized cattle, so to speak,” Clipperton said.

The hoop made the most of his opportunity aboard Stockman, happy to let the horse find his feet before producing him for a sustained run.

Stockman ($10) responded to wear down the previously unbeaten Reinvest ($4.60) and win Saturday’s Sporting Chance Cancer Foundation Handicap (2000m) by a head with The Guru ($31) two lengths away.

“He thought his job was done at the furlong and when he had a fit horse of Gai Waterhouse and Adrian Bott’s to run down, it could have gone either way but to his credit he really dug deep,” Clipperton said.

From the family of grand campaigner Destiny’s Kiss, Stockman is trained by Joe Pride who believes the three-year-old has a bright staying future.

He was earmarked as a Queensland Derby prospect but with the Classic not being run this year due to the coronavirus, Pride will see how he pulls up before deciding whether to continue his campaign.

“At the start of his preparation I was thinking he was a Queensland Derby horse,” Pride said.

“After a win like that, he would be going there at single-figure odds but the race isn’t on this year.

“It was a really good staying performance and I can only see him getting better as he gets over further and matures a bit as well.”

Stockman has now won three of his seven starts, the past two in succession.