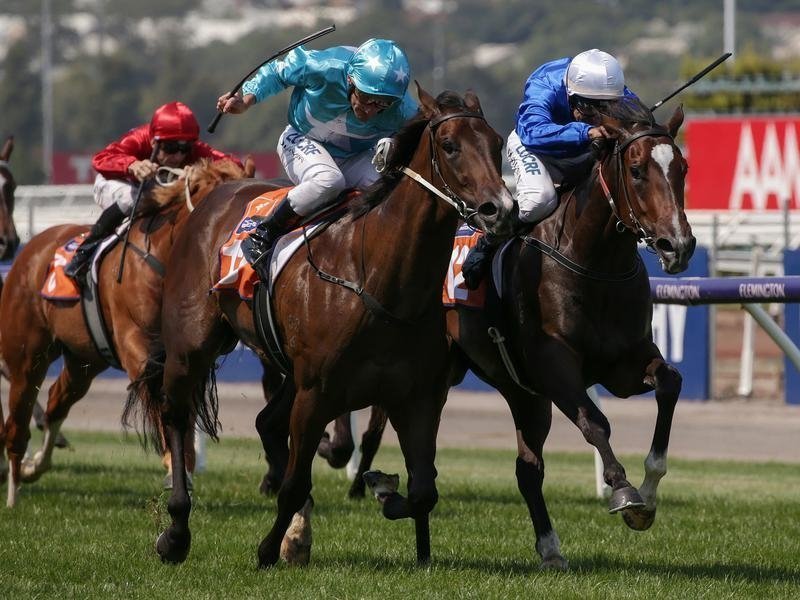 Jockey Tim Clark is thrilled to get teh call-up on Flit (right) in the Tea Rose Stakes at Caulfield.

Libertini is odds-on to continue her domination of the Princess Series, although a wet track and distance rise have a rival jockey firmly believing he can upset the star filly.

Tim Clark almost brought Libertini’s winning sequence to an end in the Furious Stakes (1200m) when he went to the front aboard Villami, the pair kicking strongly and forcing Libertini and jockey Tommy Berry to dig deep to narrowly overhaul them.

Clark was booked to partner Villami again in Saturday’s Tea Rose Stakes (1400m) at Randwick but the filly was a non-acceptor because of the heavy track, leaving him without a ride.

So when Flit’s jockey Hugh Bowman pulled out of the meeting with a broken finger, Clark was delighted to get a late call-up to partner the Godolphin filly who he regards as a threat to the favourite.

“I’m a bit lucky to get on her. Hopefully I can make the most of the opportunity,” Clark said.

“She’s a very talented filly and the 1400 looks like it will suit her. Obviously the wet track is a bit of an unknown but I’m sure she will be strong late.”

The Tea Rose will be the first time Libertini is extended beyond 1200 metres and the Anthony Cummings-trained filly is also untested on heavy ground, although her dam Aloha won the 2011 Coolmore Classic on a slow track and was a respectable sixth in that year’s Doncaster Handicap on heavy ground.

Add in an awkward barrier draw of 11 and Clark says Libertini may face her first serious test this spring.

“Her first two starts this prep she couldn’t have had a better run and drawn awkwardly there on Saturday, she may not get the perfect run she has her past couple,” he said.

“Stepping out to 1400 and on that track, it might close that gap a little bit and hopefully we’re not too far off her, unlike first-up when Flit drew wide and had to go right back and give her such a big start.

“If we can be a bit closer to her in the run, we’re confident we might be able to get over the top of her.”

Flit is an $8 chance, behind only Libertini ($1.85 fav) and the Chris Waller-trained Funstar ($4.40), a city winner on a heavy track in June and last-start second to Golden Rose contender Yao Luck.

Libertini has notched wins in the opening legs of the Princess Series, the Silver Shadow and Furious Stakes and if she captures the Tea Rose she will be tracking to become the first filly since Samantha Miss to clean-sweep the Series, which culminates in next month’s Group One Flight Stakes.