Golden Slipper runner up Away Game raced up to her best Autumn form with a dominant win in the Group 2 $500,000 Heineken 3 Percy Sykes Stakes (1200m) at Randwick on Day Two of The Championships today. 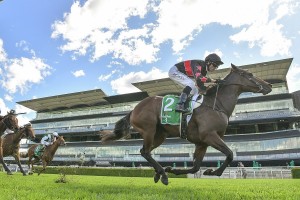 Away Game, above, was rewarded for her consistent form with a win in the Percy Sykes Stakes at Randwick. Photo by Steve Hart.

Away Game took her prizemoney earnings to just over $2.5 million with today’s win against the two year old fillies and the Ciaron Maher and David Eustace trained filly will be spelled now and set for a 2020 Spring Carnival campaign.

“I’d say she will get a break now and concentrate on the Spring,” stable representative Annabel Neasham said.

“She’s just a bonny filly, she loves being in work, just can’t wait until she turns into a three-year-old.”

“She’s been unbelievable, I think she’s ran every month since November, it’s a real credit to the team to keep her up this long.”

“We’ve spaced her runs and we were pretty confident she was coming into today as good as she was for the Slipper, but there was a little bit of a query on whether she would handle the track. She’s just so tough.”

Away Game has had a long tough campaign which includes a win in the $2m The Star Gold Coast Magic Millions 2yo Classic (1200m) at the Gold Coast in January, a fourth in the Group 1 $1.5m Ned Blue Diamond Stakes (1200m) at Caulfield on February 22 and a second to Farnan in the Group 1 $3.5m Longines Golden Slipper (1200m) at Rosehill on March 21.

Golden Slipper jockey Glen Boss stuck with Away Game today and the Group 1 winning hoop gave the Snitzel filly a perfect run in transit before producing her in the straight for a clear run to the line.

Away Game was sent out as the $3.20 favourite and once into the clear, her followers had nothing to worry about as she strode to a one and a half lengths win over the Gai Waterhouse and Adrian Bott trained Vangelic ($18).

Third placegetter See You Soon ($11) ran on from the back to finish just ahead of the Peter and Paul Snowden trained Dame Giselle ($7).