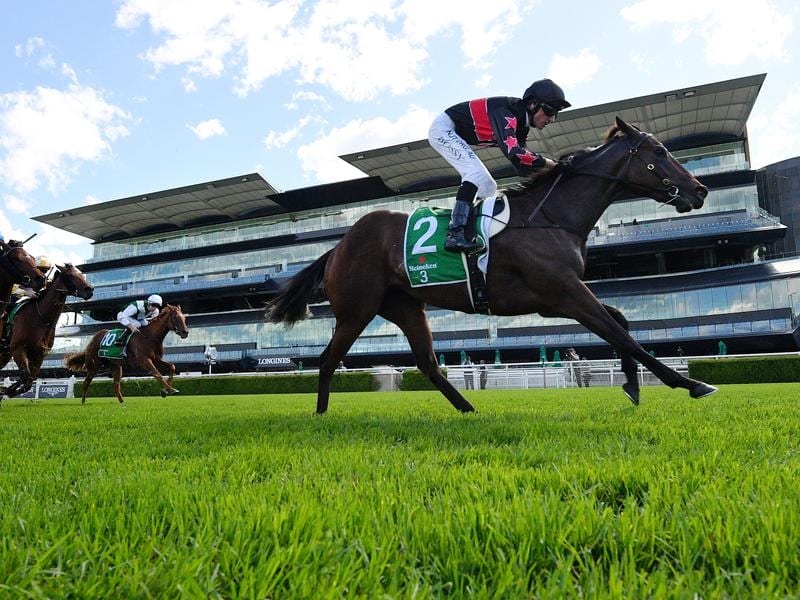 Two-year-old Away Game will take on older fillies and mares in the Robert Sangster Stakes.

Away Game’s already memorable juvenile season could reach new heights if the bold plan to run her in the weight-for-age Group One Robert Sangster Stakes is successful.

After Away Game won the Group Two Percy Sykes Stakes at Randwick on April 11, trainers Ciaron Maher and David Eustace revealed plans to pit the filly against older opposition in Saturday’s Group One Sangster (1200m).

Eustace said Away Game had returned from Sydney to their Ballarat base in good order ahead of the trip to South Australia for the Sangster in which she will carry 47kg with Dean Holland to ride.

The stable also has four-year-old Bam’s On Fire, last-start winner of the Group Three Victoria Handicap (1400m), among the 32 nominations.

“Away Game has travelled down from Sydney in good order.

“Hopefully with the drop in weight we think she’ll be highly competitive.

“You wouldn’t be doing it without the weight relief, but she’s obviously also very smart.”

Away Game will get 9.5kg off the mares under the weight-for-age conditions and 8kg off the three-year-old fillies.

Two-year-olds rarely run against older horses at Group One level but Maher and Eustace have tried it before with Dubious fifth in the weight-for-age Kingsford Smith Cup (1300m) in Brisbane last year.

The Sangster has been a Group One race since 2005 with four three-year-old fillies winning in that period but no two-year-old has tried.

Away Game has won four of her seven starts highlighted by victories in the $2 million Magic Millions 2YO Classic at the Gold Coast in January and the Percy Sykes.

The filly finished second to Farnan in the $3.5 million Group One Golden Slipper and fourth in the Group One Blue Diamond.

Multiple Group One winner Sunlight is the $3 favourite in early market for the Sangster with Away Game next at $6.

Bam’s On Fire is $13 and Eustace said the mare had come through her Caulfield win well.