The barrier draw gods are being kind to classy Kiwi trotter Majestic Man in this NSW Inter Dominion so far.

Renowned for his gate speed, Majestic Man drew perfectly in two and led throughout, albeit only narrowly, on opening night at Menangle over 2400m.

He drops back to an even more suitable sprint trip of 1730m at Bathurst on Wednesday night and again looks an automatic leader from gate two.

Local speedster Caligula will zip out from three, but driver Blake Fitzpatrick is more likely to go with Majestic Man briefly with a view to dropping in behind him and looking for the sprint lane run late.

“I’m sure he’ll lead again and over the sprint trip, which really suits him, around Bathurst he’s going to be very hard to beat,” trainer-driver Anthony Butt said of Majestic Man.

“You could say he should’ve won more easily the other night, but I liked the fact he felt all-out at the 100m but still found a way to win.

“We’re all sure, including Phil (Williamson), that he’ll be better for that run.

“He’s come through it well and the plan was always for him to build the through the series.

“We had that juggling act of freshening him up after some of his hard racing back home so he had enough in the tank to get through the series.”

The other key runners in Majestic Man’s heat are veteran Tough Monarch, who led and disappointed with a weakening sixth on opening night, and exciting four-year-old mare Funky Monkey, who galloped early when ninth on Saturday.

Tough Monarch has drawn inside the back row (nine) and trainer-driver Rickie Alchin will to decide whether to stay inside and risk being held-up in traffic or trying to come away from the marker pegs early.

If Funky Monkey trots well from the back row (gate 10), you can bet driver Robbie Morris will be around the field early to put her into the action given it’s vital she gets big points at Bathurst to keep her final prospects alive. 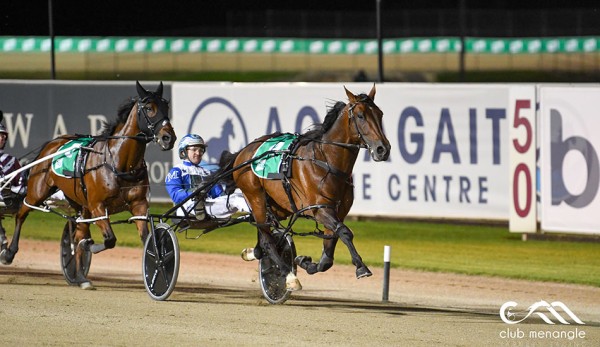 In the pacing series, Luke McCarthy said big guns King Of Swing and Expensive Ego had come through their opening round heat wins in fantastic fashion.

“They’re both great, couldn’t be happier with them,” he said. “The draws haven’t been kind to them at Bathurst, but I think they’re in such a good place they came overcome it.”

King Of Swing has drawn outside the front (gate eight) over the short 1730m trip on Wednesday night.

Brilliant beginner Boncel Benjamin, who led and took a sit on King Of Swing on night one, should lead again from gate five, but it more likely to hold the front over the suitable sprint trip at Bathurst.

Expensive Ego fared only slightly better in gate seven with slick beginners and quality rivals like The Black Prince (three), Mach Da Vinci (four) and Triple Eight (one), all drawn inside him. And then there’s night one eye-catcher Majestic Cruiser stalking from the back row (gate 10).

“If they’ve both got to sit parked, then so be it. They’re going well enough to do that and still go very close to winning,” McCarthy said.

Team McCarthy’s horror pacing draws continued with Spirit Of St Louis landing outside the front (gate eight) in the other heat.

“That’s a challenge for him,” McCarthy said. “I was happy with him on Saturday night. He’s probably not at his best in front, but he fought it right out to the line and was only beaten a whisker. He’ll improve off the run as well.

“But it’s going to be hard to get a good spot from his draw at Bathurst. He’ll need plenty of luck.”

Luck changed in the draw for Team McCarthy’s only trotting hope, Humble Ladd, who drew the pole in the first of the two heats at Bathurst.

Humble Ladd made an uncharacteristic brief gallop early in his heat on night one, but did a good job to recover and finish eighth.

“He didn’t feel himself, so we’re doing a bit of work on him,” Luke said.

“The draw is a huge help, just what he needs. If we get him right, he’ll lead because he’s quick out, and be very hard to beat over the short trip.”

Humble Ladd’s main danger will be glamour Victorian mare Pink Galahs, who ran a brave third after being forced to do the grunt work outside the leader on night one.

“She’s come through it will. She came in underdone, so the run will actually bring her on,” Pink Galahs’ trainer-driver Matty Craven said.